Lost Ark has been the latest MMORPG to take over the Steam servers since it was released, and unlike other titles that've premiered in the last year, Lost Ark has been maintaining a steady playerbase since it launhced.

Now, the developers are looking ahead to the coming months and the type of content they want to be releasing to the players, and this is why they released the April/May roadmap!

It's pretty typical for developers to release roadmap's of the upcoming content they're currently working on for their game, and Lost Ark has done this in the past, and we're in for a treat this timea round.

Over the next two months, they plan on adding a brand new Martial Artist Class in the form of Glavier, a new Continent, and a New Warrior Class plus so much more.

It's better if we let the developers themselves explain what's coming to Lost Ark in the next little while, so sheck out all the content coming to the game down below.

Practicing an artistic and deadly form of martial arts, the Glaivier slices and dices her way through the battlefield, weaving together attacks with her spear and glaive. The Glaivier has two distinct skill sets which can be swapped between— Focus and Flurry— with each stance and skill set represented by one of her two weapons. The shorter spear is used to unleash a furious barrage in the Flurry stance, while the longer glaive harnesses Focus stance for gracefully lethal strikes and sweeping attacks. While certain builds may focus your attention onto one of these weapons, an effective Glaivier can maximize their potential by creating balance between the two stances, building up energy in one stance which grants an impactful stat-boost when swapping to the other. The Glaivier will join the Wardancer, Soulfist, Striker, and Scrapper as the fifth Martial Artist Advanced Class.

The settlers of South Vern borrowed technology from many different races to turn this once-barren land into a place of abundant waters and green pastures. Hearing rumors of the dangers that plagued North Vern, the Senate shut South Vern down and formed a new knightly order. Suspecting that something was amiss, Ealyn, the Queen of Vern ordered Knight Commander Avele to investigate. What could be happening to this peaceful continent? Uncover the mysteries of South Vern as you venture into this new region, encounter new characters, and complete quests. South Vern will join Punika as the second Tier 3 continent, requiring an item level of 1340 to begin. For our newer players, we’ll be sharing more information on how to work your way toward Tier 3 and join this new adventure.

South Vern and the Glaivier Advanced Class are not the only things that will arrive in April. Stay tuned in the coming weeks for more release specifics, such as new log-in rewards, in-game events, skins & store updates, and (okay, we’ll spoil one now), a Feiton powerpass that provides item level 960 gear to level your new Glaivier, or any other character you’d like! 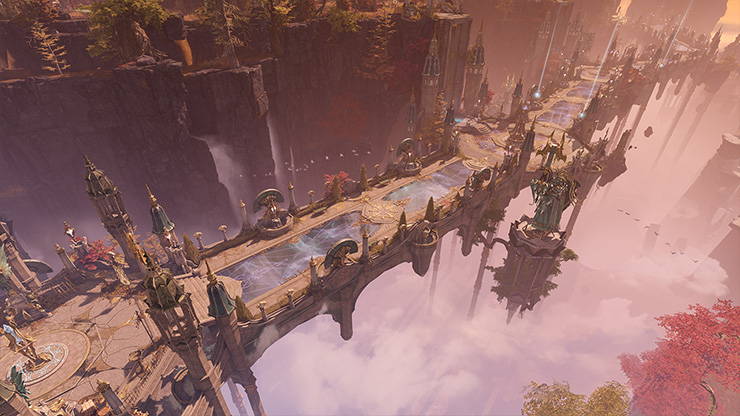 We’ve talked about the cataclysmic impact that Warriors have on the battlefield, but nothing embodies this better than the hammer-wielding Destroyer. Armed with a variety of skills centered around charging into the heart of the fray, their hammer attacks are so catastrophically crushing that Destroyers can bend gravity to their will— slowing, launching, pushing and pulling enemies— whatever it takes to utterly, beyond a shadow of a doubt, destroy them. The Destroyer will join the Berserker, Paladin, and Gunlancer as the fourth Warrior Advanced Class.

May will also introduce a bunch of quality of life changes, including the ability to check daily & weekly content participation in a new menu, UI updates, improved party finder & party invites, updated loot dismantling, convenience features for Market/Auction House, and a few fun features, like being able to randomly summon favorited mounts and new hairstyles for customization!

Guardians are powerful entities that can tip the scales toward good or evil. A new Guardian will arise and must be vanquished before they usher in an age of darkness. Upon arrival, Deskaluda will be one of the most powerful Guardians in Arkesia, requiring a high item level to encounter (1415). As with the other Guardian Raids, you can attempt to vanquish them alone, with a party, or matchmake with up to three other heroes.

Valtan will introduce the first Legion Raid into the western version of Lost Ark. Legion Raids are difficult team-based activities that require teamwork to understand and enact the strategy necessary to counter each Legion Commander's unique characteristics, abilities, and mechanics. As Legion Raids are challenging and take time, there are gates (or checkpoints) that will save player's progress as they advance through the Raid. Valtan is an eight-player Legion raid, and introduces a swathe of new mechanics. Players will need to be item level 1415, and we'll share more information on Legion Raids when we approach the May Update.